From ATLAS Wiki
Jump to: navigation, search
This article is a stub. You can help ATLAS Wiki by expanding it.

Tuna are a type of non-aggressive Fish found in ATLAS.

Tuna are non-aggressive and evasive meaning they will flee if attacked.

They can appear in many different sizes.

The fins on it's side and the tail-fin count as dead-zones for projectiles, it's best to fire at one from the side, and if it's actively swimming, aim slightly in-front of the Tuna.

Tuna are not a tamable creature currently.

Tuna has been found in the following regions:

X = No Tuna's in this grid (confirmed) 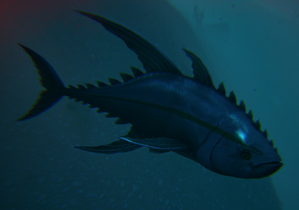