Accordion. The songs are different, and there is no crossover. And easy

accordion song cannot be played on the

War Drums. The dancing in the spec tree does not appear to be implemented yet.

Different songs, even if listed as easy, have different difficulty levels.

To equip music on an

Accordion, drag music from your inventory to the

Accordion in your hot-bar. To equip music on the

The big difference between

War Drums is that when you attempt to play a song and fail, the

Accordion allows you to keep the music and try infinitely. The

To make a band, you left click with sheet music equipped to bring up the 'loading' or 'queuing' screen. If there is someone nearby with the same instrument, and the same sheet music loaded, they will have an option pop up to join the band. You can then play the same song together. When I tested this, I was spec'ed to music, the person who joined was not. Both songs can be heard played simultaneously, dynamically. It sounds quite cool.

The issue I have is that a successful completion of a song does not result in any buff. It doesn't seem to matter where or what song I play, or who I play it to, no onlookers receive any sort of benefit for any length of time. I am fully spec'ed into the tree with all duration and increase radius/distance buffs included. As I play, there is a green haze around the perimeter which I assume is my area of effect, but nothing happens. Upon successful completion, I get a 'party on dude', and some purple notes on nearby listeners, but that is it. It also does not appear to have any effect on NPC Crew members.

Additionally, it unlocks the following skills:[] 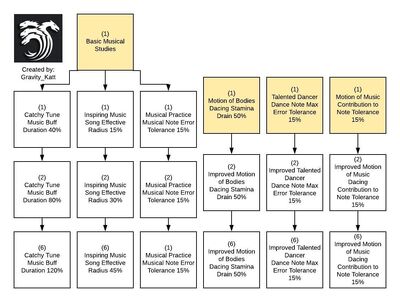