Gorgons are one of the Monsters in ATLAS.

The Gorgon is an extremely aggressive creature and will attack on sight and use scream attack.

Gorgon is a mythical creature with a snake body and a girl's face. the hair of gorgon are snakes.

On Sight Of Enemy, The Gorgon Screams which paralyzes any enemy in a small radius. Also Shoots a Projectile which gives Status Effect "Snaked" to whatever it hits. If you get paralyzed, you are most likely dead. 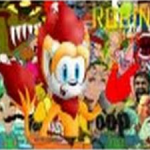